Home / Must Eats / Top 10 Georgian Foods for all Foodies

Top 10 Georgian Foods for all Foodies

Georgian gastronomy is largely dominated by signature dishes of the prominent regions like Guria, Adjara, and Abkhazia. Each region has some specialties to rely on, regarding the usage of the ingredients and cooking styles. Further adding to it, there are some obvious influences of other countries. 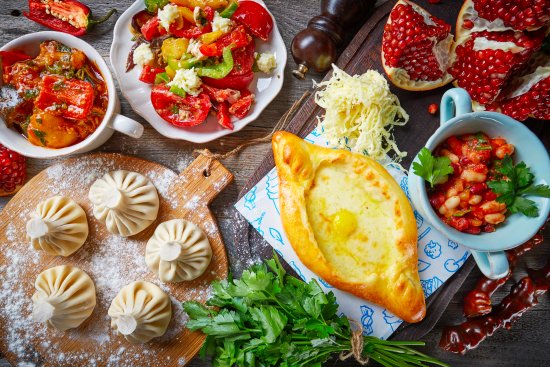 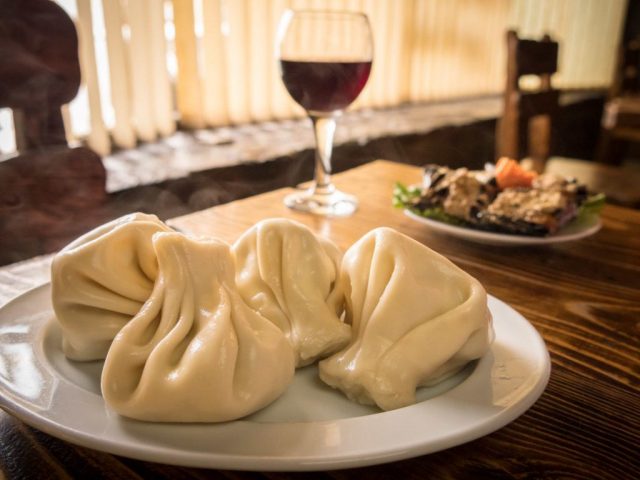 What is it: Dumplings with meat and vegetable fillings. The shape is unique as the top is pointy and the body has some stripes throughout. The finger food is healthy and is often used as an appetizer, especially during Christmas. Otherwise, it’s a pretty regular one that you can find at every corner of the street.

What does it taste like: The stuffing makes it a wholesome thing with some flavorsome cooked chicken or lamb and herbs. For the vegetable variation, you will get the taste of mushroom or cheese. 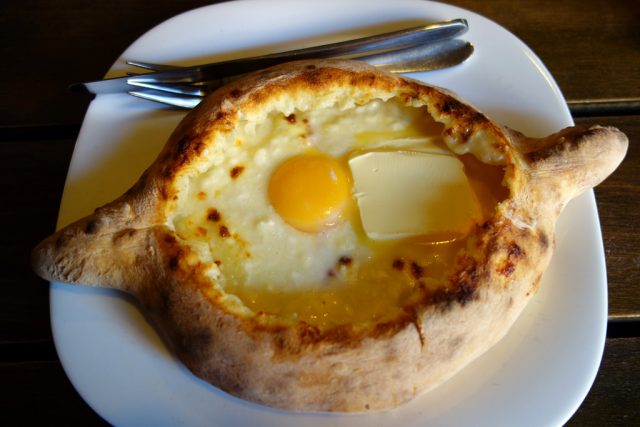 What is it: Bread with cheese fillings and often served with a poached egg and cheese slice on the middle that is known as open khachapuri. However, the shape and the garnishing depend on each region. Its popularity is also reached Russia. The variations are named as Megruli Khachapuri, Kachapuri Imeruli, and Adjaruli Khachapuri.

What does it taste like: The soft bread has a cheesy feeling, especially in the middle, and the egg acts as an accompaniment.

3. Badrijani – The Item for Vegetarians 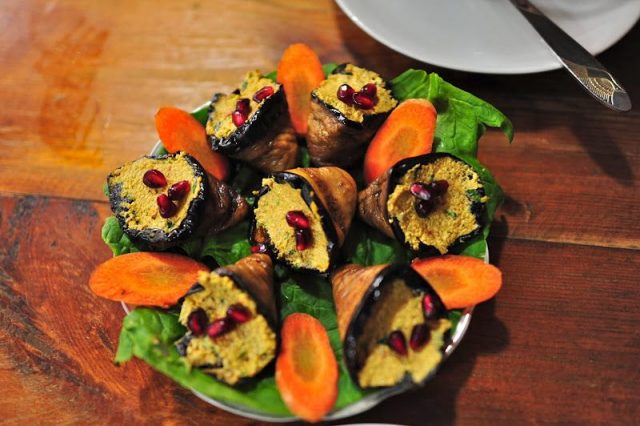 What is it: Also known as ‘Nigvziani Badrijani’, this is an eggplant roll with a paste inside. Typically it is garnished with pomegranates and herbs.

What does it taste like: The flavor of the fried eggplant comes with the thick paste of garlic and walnut. Mostly,  people consume this as an appetizer. 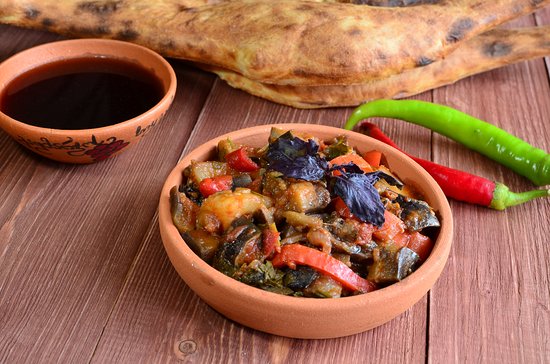 What is it: Assorted vegetables cooked with some herbs spices. Whenever the locals feel to incorporate meat, they go for either beef or lamb. Often considered as a family dish this is a famous food from the country of Azerbaijan.

What does it taste like: A fresh smell and combined flavors of tomato, potato, eggplants along with parsley and bell peppers make the preparation complete in itself. However, the level of spice depends on how much you prefer and no side dish is usually required. 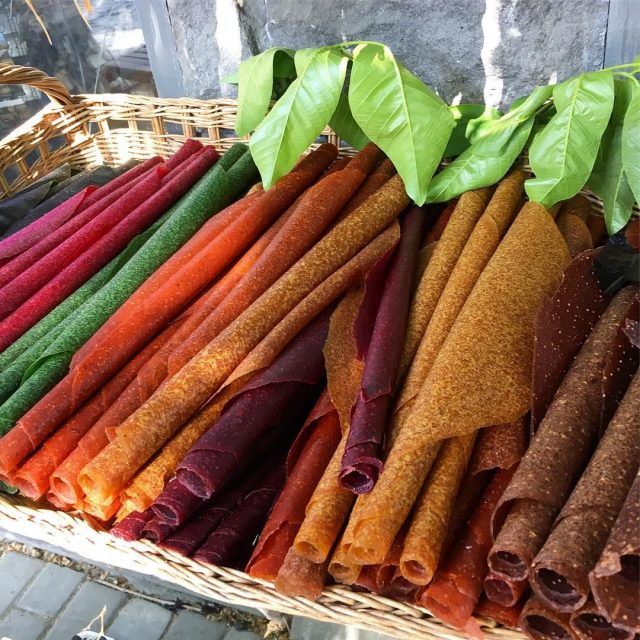 What is it: Sundried flat fruit porridge available at the food vendors of the street or market. Together they look colorful but the color of a specific sheet of tklapi depends on the fruit it is made of. Fruits like peach, apple, apricot, local plum or tkemali, kiwi are generally used.

What does it taste like: While apricot and peach made tklapis are sweet, the ones made of tkemali, is sour. 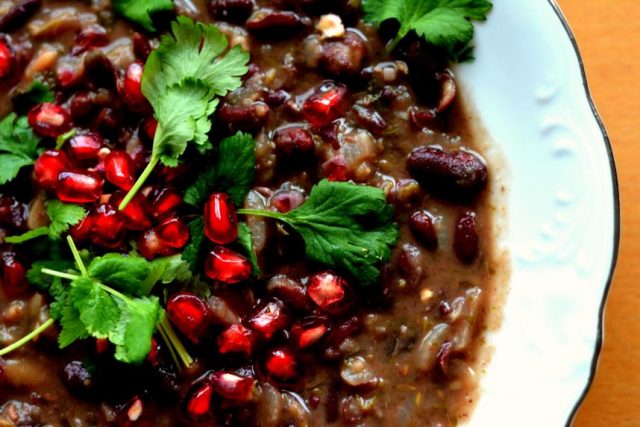 What is it: A bean stew preparation that essentially includes some spices. Among many variations, the ‘lobio nigozit’ is popular in Georgia. This is all about red kidney beans that are spiced up and served cold. Hot lobio is also there and a variation like meat inclusion is mention worthy.

What does it taste like: The bean being the main element will be all over your tongue along with onion, garlic, chili pepper, walnut, and coriander. Often topped up with pomegranates, this garnishing ensures a sweetness in moderation. 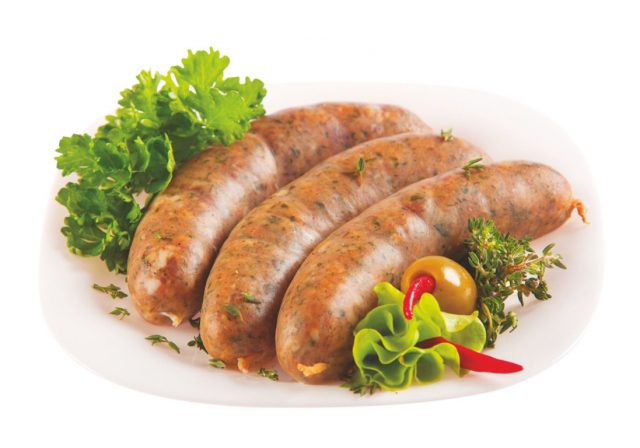 What is it: Beef or pork sausage either fried or grilled and served with spices. This is a must item in every household during any celebrations like festivals or wedding parties.

What does it taste like: Spicy as the black pepper, garlic, and cinnamon complement the chewy sausage. 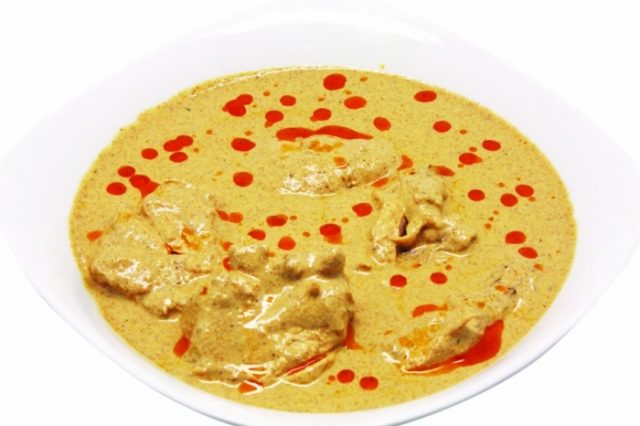 What is it: A soup preparation with a poultry product meaning either chicken or turkey in walnut sauce. Traditionally this is served cold.

What does it taste like: It is moderately hot as a certain amount of chili is there. Also, a fresh taste of coriander will be one of the distinct tastes of the dish. 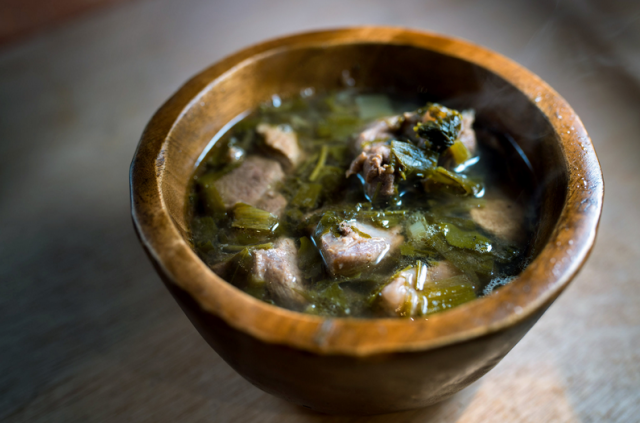 What is it: A beef stew with lots of green vegetables, but sometimes the choice of meat changes as the chicken is another popular option.

What does it taste like: The apparently colorless soup has a rich flavor of green onions, coriander, green plumps, green peppers and garlic beside the meat. This is best to serve while hot alongside some traditional bread. 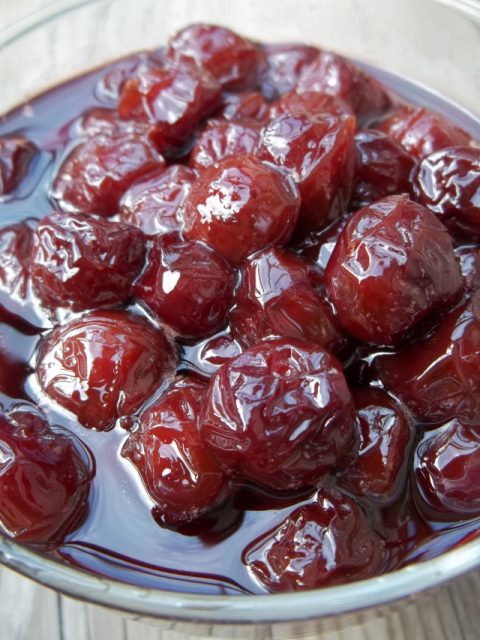 What is it: A fruit or vegetable-based dessert known as murabba is called cherry murabba when the main ingredient is cherry. The most common things used for the preparation are rose petals, watermelons, walnut, green tomatoes and so on.

What does it taste like: Sweet and syrupy with a beautiful crimson color. The texture is a little thick but nothing can be more perfect than ending your meal with this.

As a country, Georgia has been an impressive one regarding many aspects, but when it is about food you are hardly to get authentic Georgian dishes in other places of the globe, except for some places. So, add visiting to this country to your bucket list.