Home / Must Eats / 19 of the Best Alcoholic Hawaiian Drinks

19 of the Best Alcoholic Hawaiian Drinks

Hawaii, a picturesque archipelago, is no way behind when it comes to serving alcoholic beverages. Vodka, rum, lemon, pineapple, and cranberry form the main components for most drinks. Let us check out the list of favorite drinks in Hawaii. 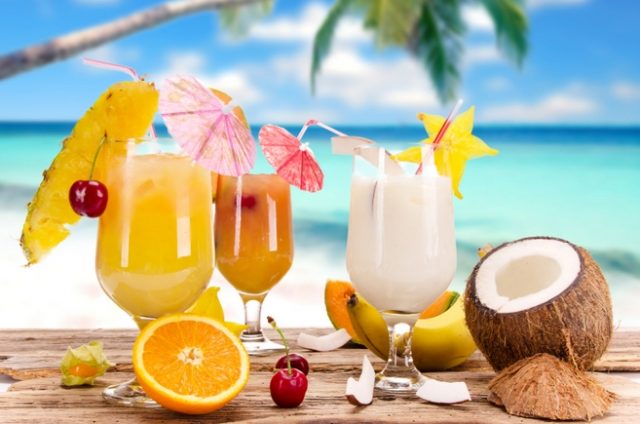 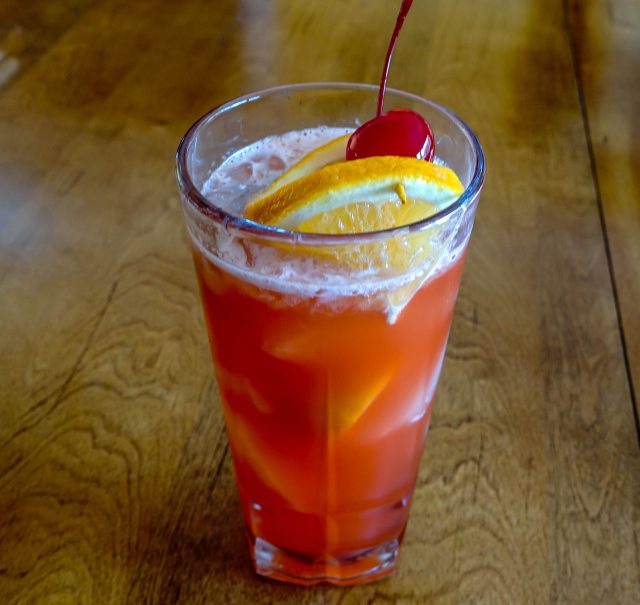 What is it: A refreshing cocktail, comprising of liqueurs like amaretto, vodka, and Southern Comfort, alongside orange and pineapple juices as well as lime and lemon wedges. Sliced orange and cherries serve as garnishes.

How is the flavor: Sweet, citrusy, and certainly refreshing, all because of the ingredients that go in its making. 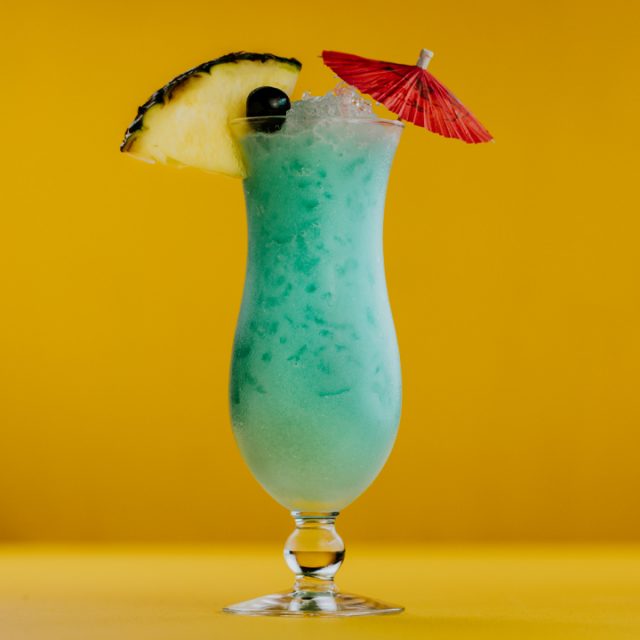 What is it: A sought-after tropical cocktail prepared using pineapple juice, rum, Blue Curacao, vodka (occasionally), and sweet and sour mix. Harry Yee, the head bartender of Hilton Hawaiian Village, invented this drink in 1957. One should not confuse it with the Blue Hawaiian Cocktail that has crème coconut in place of sweet and sour. Mostly served on the rocks, the drink, when mixed with ice, makes for a frozen cocktail. Blue Hawai is, however, a seasonal drink, primarily consumed in summer. They are occasionally green in color due to the presence of pineapple juice.

How is the flavor: Refreshing, citrusy, and sweet, mainly due to the addition of Blue curacao, while the sweet and sour mix adds to its lemony taste. 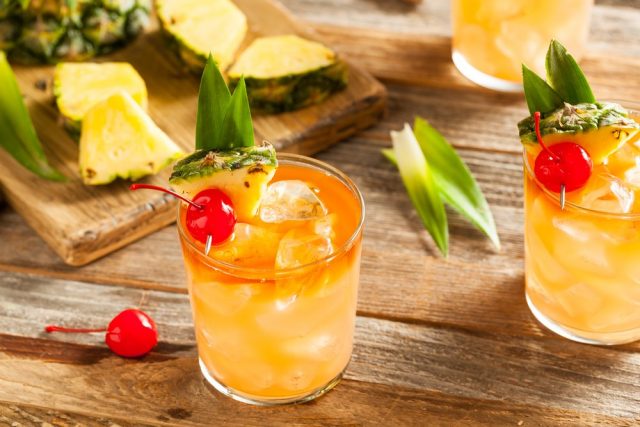 What is it: A rum-based cocktail made with lime juice, orgeat syrup, and Curacao liqueur. Victor J. Bergeron had made claims of inventing this cocktail in 1944, in his restaurant named Trader Vic’s situated in Oakland city of California. It derives its name from the Tahitian word Maita’ meaning “excellence” or “good.” It gained immense popularity mostly in bars and tiki-themed restaurants, even featuring in the Blue Hawaii, a film by Elvis Presley.

How is the flavor: Tart, citrusy and refreshing but not sweet. The taste of lime, as well as rum, seems to dominate, on the other hand, orgeat and orange curacao add softness. 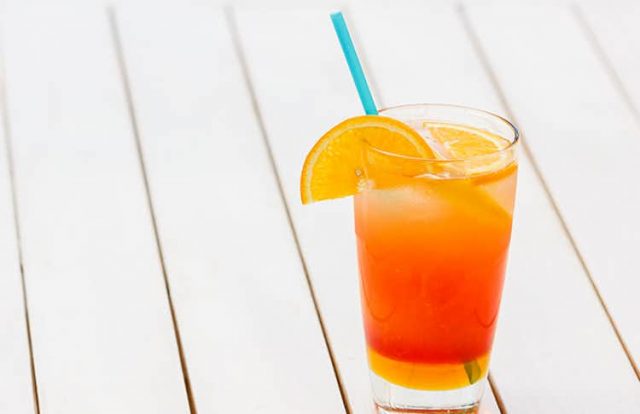 What is it: It is a soothing beachy cocktail prepared from juices of pineapple and cranberry alongside vodka, served with cubes of ice.

How is the flavor: A sweet drink and the addition of vodka could make it citrusy, creamy, or even malty.

5. Pog – One of the Best Hawaiian Drinks 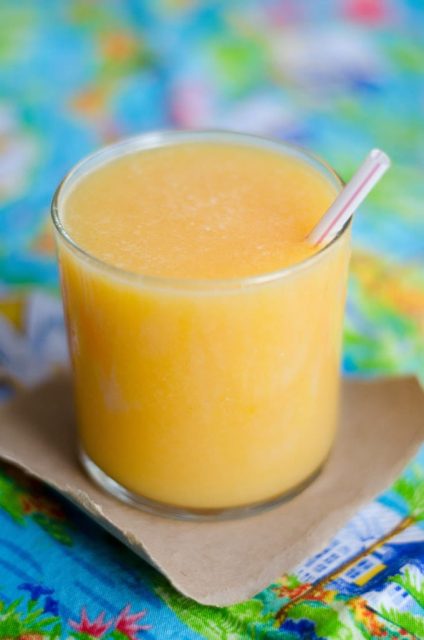 What is it: Also known as Passion fruit-Orange-Guava, this tropical drink was created in the year 1971 by Mart Soon. The juices of guava, passion fruit, and orange go in its making.

How is the flavor: Fruity, tart, and sweetness overloaded, all because of the fruits that go in its making. 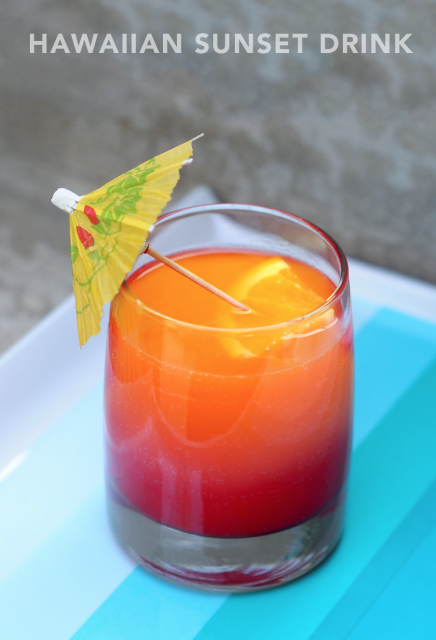 What is it: A refreshing drink having cranberry, orange juice, and vodka as its primary ingredients and served with cubes of ice. Its dark orange color may have perhaps earned it the name sunset drink.

How is the flavor: A blend of sweet and sour because of orange and cranberry, whereas vodka gives it a subtle flavor. 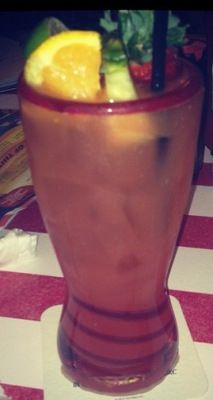 What is it:Vodka, gin, Grand Mariner, Southern Comfort peach liqueur, and orange juice go into the making of this cocktail.

How is the flavor: The addition of Grand Mariner makes it dense and sweet. Gin makes the drink appear a little bittersweet, and the Southern Comfort liqueur adds to its uniqueness. 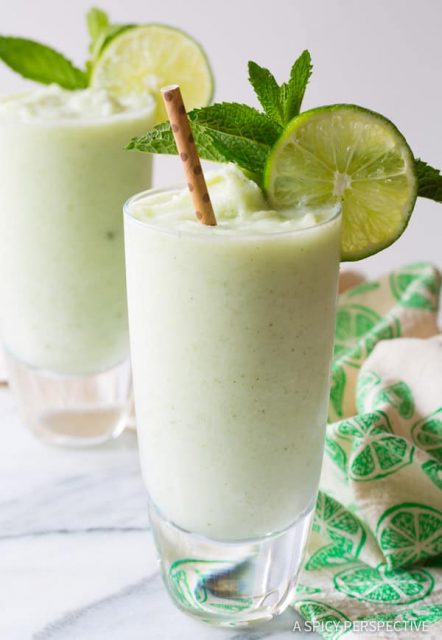 What is it: A fantastic fusion drink made of mint leaves in combination with coconut rum, white rum, and cream of coconut. It has garnishes of mint leaves, lime wedges, and grated coconut.

How is the flavor: Minty, while the addition of coconut rum and white rum makes it sweet and sugary. The crème of coconut, on the other hand, makes it buttery, whereas the lemon wedges give it a citrusy taste. 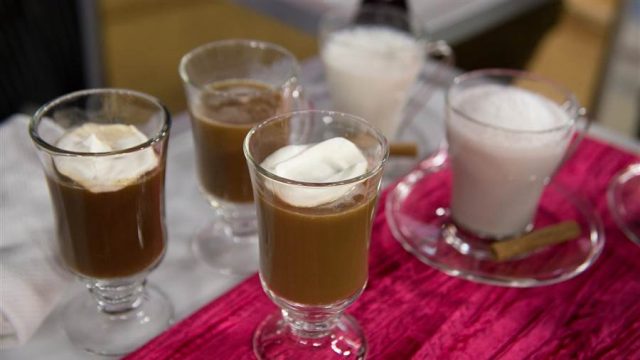 What is it: An alcoholic coffee drink, prepared with Kahlua, crème de cacao, hot coffee, and whipped cream.

How is the flavor: Strong, sweet, and coffee-flavored, with the whipped cream giving it a light and creamy texture. 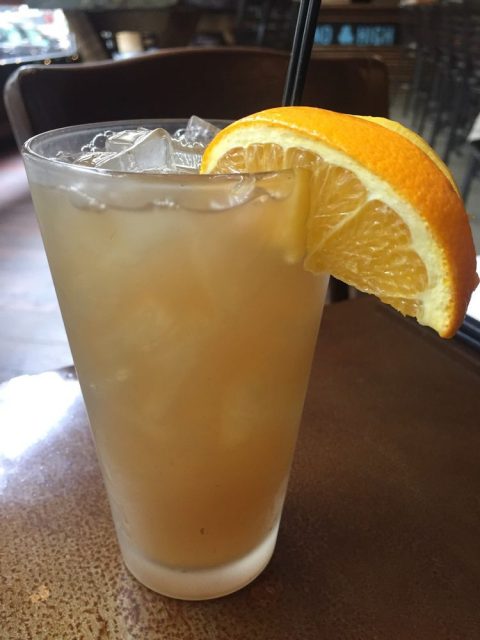 What is it: Vodka, light rum, gin, tequila, sour mix, and pineapple juice is involved in its preparation.

How is the flavor: A lightly flavored fruit drink, while the addition of alcoholic beverages gives it a subtle and distinct taste. The presence of tequila makes it smooth, gin gives it a refreshing, bittersweet flavor, and light rum enhances its sweetness. 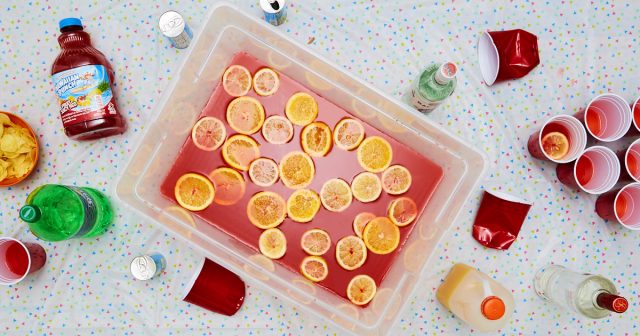 What is it: The main ingredient of this drink is the Hawaiian Punch. The other components include vodka (or even tequila or rum), orange and pineapple juice, lemon-lime soda, as well as orange or lemon wheels as a garnish.

How is the flavor: Smooth and fruit, making it immensely delectable. 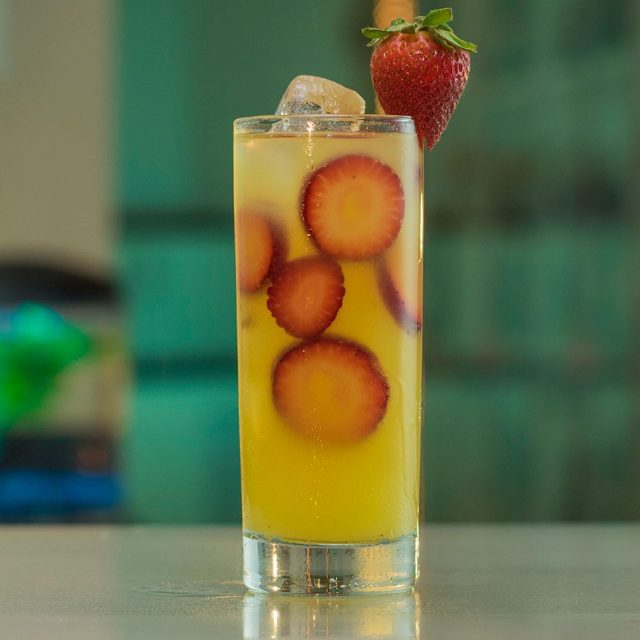 What is it: A fruity delight prepared with spiced and coconut rum, peach schnapps, and pineapple juice, whereas strawberry slices serve as garnishes.

How is the flavor: It has the fruity and caramel-like taste of spiced rum,  sweet flavor of coconut rum, the freshness of peach schnapps and tartness of pineapple juice.

13. Hawaiian Sex on the Beach 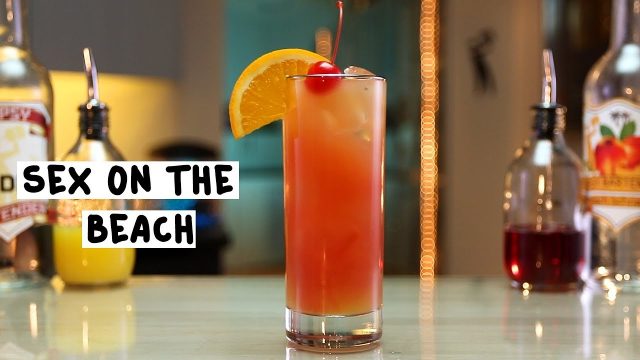 What is it: Unique in its name, this drink would bring in the flavor of the beaches. Rum, coconut rum, peach schnapps, cranberry juice, pineapple juice, coconut, and coconut water, teamed with cherry and orange slices, goes into its preparation.

How is the flavor: Sweet and fresh, a perfect drink to relish in the summers as you get swayed away by the beauty of the Hawaiian beaches. 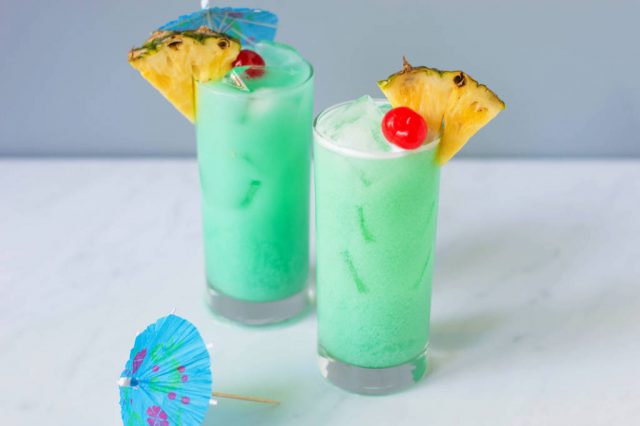 What is it: A fusion of pineapple rum, pineapple, blue curacao, and crème of coconut (that distinguishes it from Blue Hawaii).

How is the flavor: The blue curacao makes it citrusy, the pineapple rum gives it a sweet, tart taste, and the crème of coconut makes it thick and delicious. 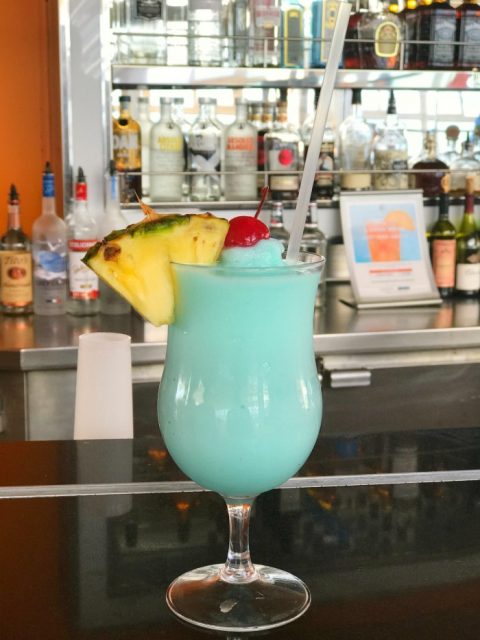 What is it: It is mostly similar to the Blue Hawaiian the only difference being the addition of lemon-lime soda and vodka.

How is the flavor: The taste is as refreshing as the Blue Hawaiian though less sweet. 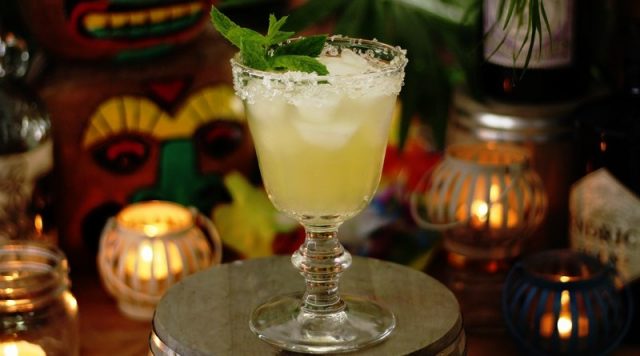 What is it: A tropical mixed drink made by combining light and overproof rum, lemon juice, pineapple pieces as well as honey syrup. Mint sprig and sugar rim serve as garnishes.

How is the flavor: This would be an immensely sweet drink, absolutely living up to its name, while the sprigs give it a minty flavor. 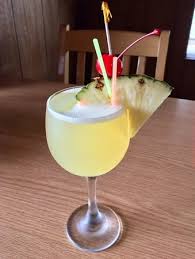 What is it: Another famous cocktail made of coconut rum, pineapple juice, and champagne, and garnishes of pineapple slices or cherries.

How is the flavor: Every sip would bring in a tinge of sweetness, transcending you to a different level altogether. 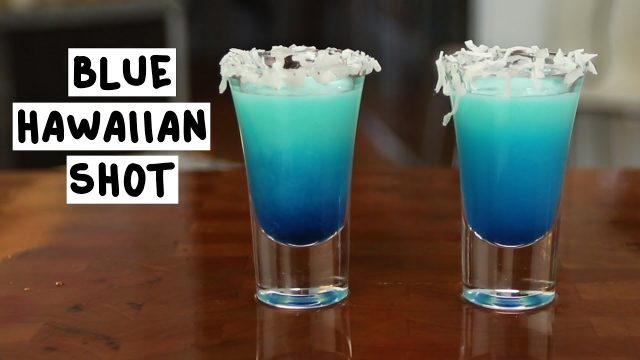 What is it: A refreshing drink made from white rum, pineapple juice, blue curacao, crème of coconut, splashes of blue curacao syrup, and even coconut flakes as a garnish.

How is the flavor: Citrusy, as well as sweet and nutty (because of the creme of coconut). Blue curacao syrup gives it an orange flavor. 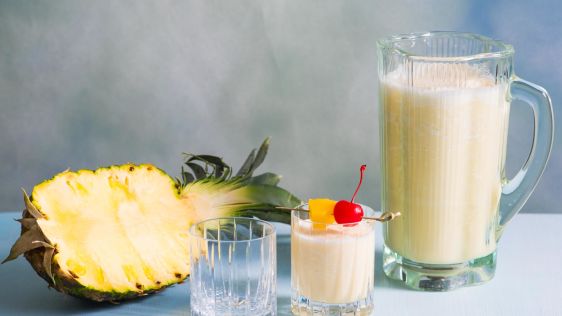 What is it: This drink is made with vodka, pineapple juice, coconut cream and cubes of ice, while pineapple slice goes into garnishing of this beverage.

How is the flavor: Sweet and creamy, giving a refreshing feeling.

Besides the ones mentioned above, other refreshing alcoholic drinks like mele kalikimaka mai tai, Royale Hawaiian cooler, and Hawaiian Margarita frozen tequila. So on your next visit to Hawaii, do not miss out on these exotic beverages that would take your breath away.