Offbeat: The Mighty Fortress of Chittorgarh in Rajasthan, India

I’m starting a new section on this blog, titled ‘offbeat inspiration’, where I’ll highlight an offbeat destination – usually everyday, but more likely, around 3-4 every week. These will be more compact than my list-based articles and should serve as an introduction to the place. Like the rest of the website, the focus will be on good imagery.

I’ll kick off the section with a look at the gorgeous Chittorgarh Fort in the desert state of Rajasthan in India. 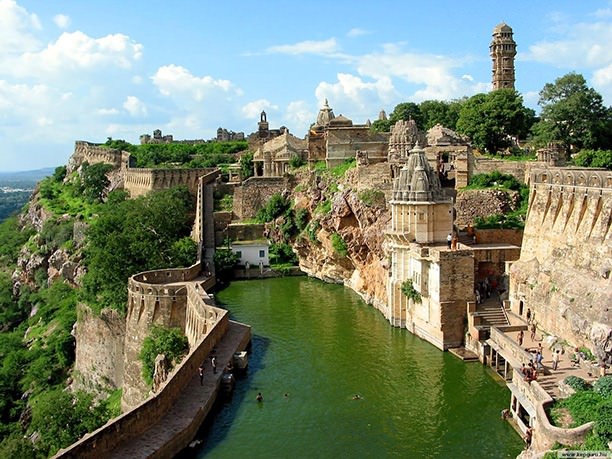 The Chittorgarh Fort is located in the town of Chittorgarh in southern Rajasthan, a desert state in the western part of India.

Historically, the region around the fort was called ‘Mewar’.

The Chittorgarh Fort – shortened to just ‘Chittor’ by the locals – is the largest fort in India. It’s foundation dates are a bit murky, but by most estimates, it was constructed somewhere in the 7th century CE by a king in India’s Maurya dynasty, Chitrangda Mori.

The Chittorgarh Fort and the city inside and around it – Chittorgarh – served as the capital of the kingdom of Mewar in Rajasthan. The Indian state of Rajasthan has traditionally been home to dozens of warrior clans and princely states, of which, Mewar was among the mightiest. The fort has been sacked just thrice in its nearly 1400 year history.

Chittorgarh is home to one of Rajasthan’s most popular folk heroes, Maharana Pratap. As the ruler of Mewar, Maharana Pratap is supposed to be symbolize the traditional Rajput (a Rajasthan-based clan) qualities of chivalry and bravery. His struggles against the Mughal ruler Akbar are the stuff of legend across North India. He is said to have pioneered guerilla warfare tactics against a better armed opponent (the Mughals) at the Battle of Haldighati.

Because of Maharana Pratap, the Chittorgarh holds special place among Rajasthan’s local people. For many Rajputs, a visit to the fort is not unlike a pilgrimage.

Chittorgarh is the largest fort in India and has a circumference of 8.1 miles with a maximum width of 1.9 miles. To get to the fort, one must walk a steep half-mile long zig-zag pathway and cross a bridge that spans the tiny Gambhiri River. 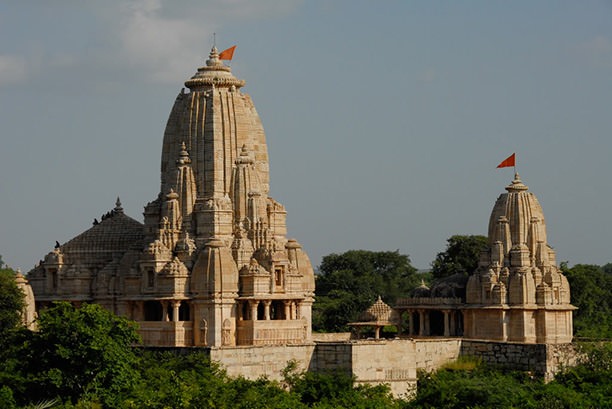 A temple dedicated to an Indian princess, Meera Bai, who ‘married’ the Hindu God, Krishna, and is considered a saint in the Hindu tradition. 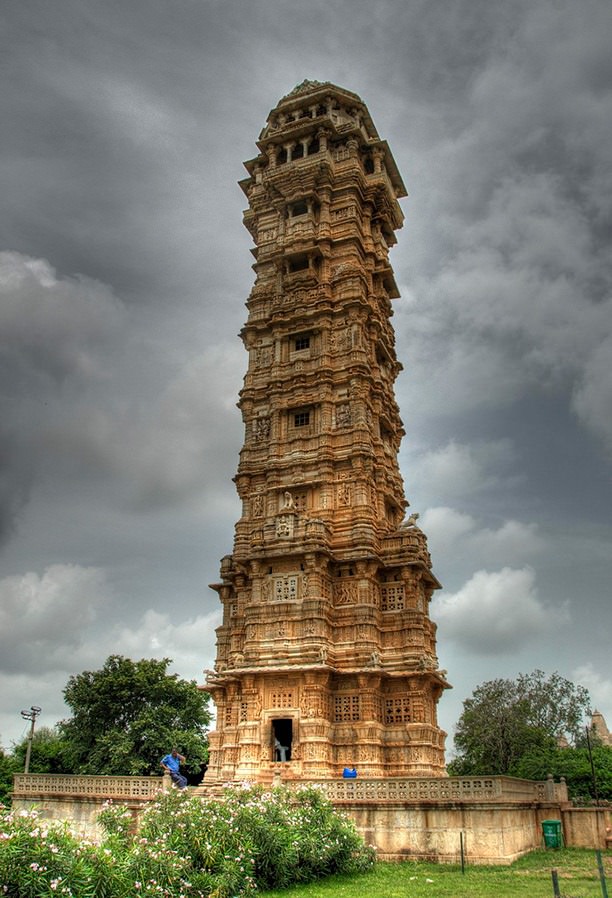 Literally, “Tower of Victory”, this tower was constructed to celebrate Chittor’s victory over Mahmud Shah Khalji. It remains one of the most beautiful examples of Rajput architecture. 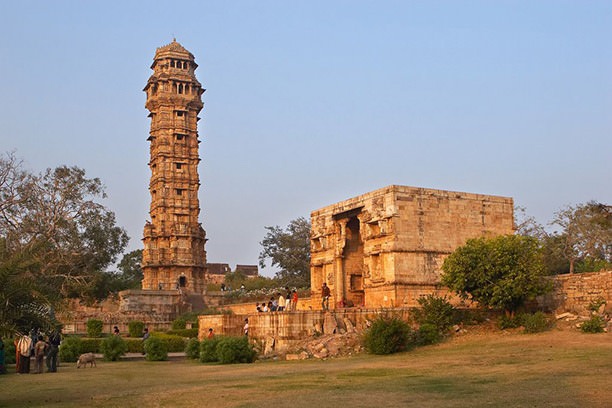 A close up of the carvings: 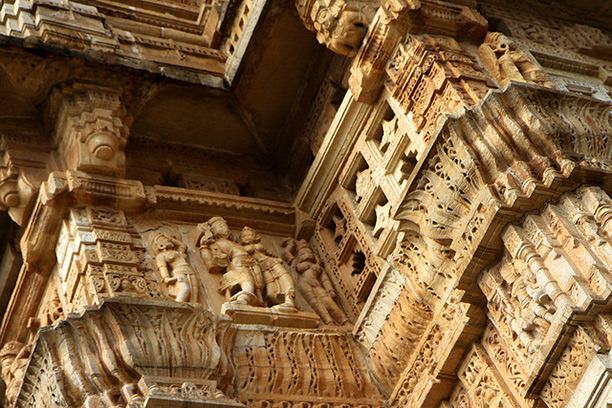 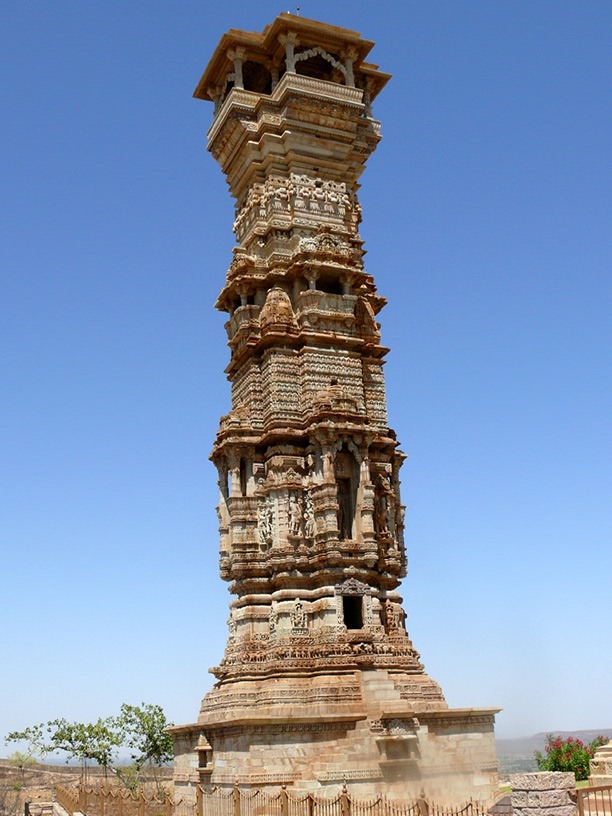 Literally, “Tower of Fame”, this tower was built some 350 years before Vijay Stambha. It has some stunning stonework and bears few traces of the Islamic architectural traditions that can be found in Vijay Stambha.

A close view of the carvings on the tower. Notice how the carvings are more angular than those on Vijay Stambh. 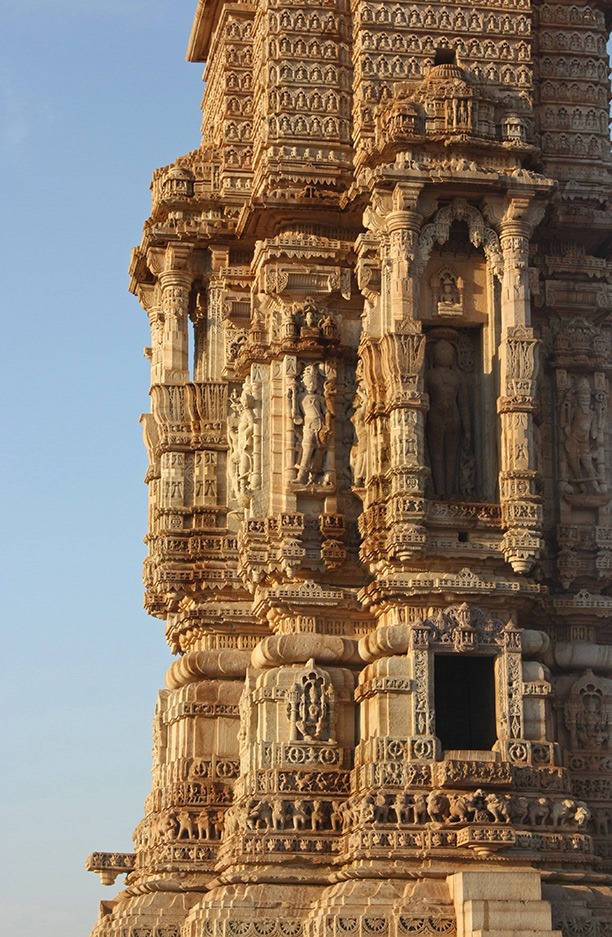 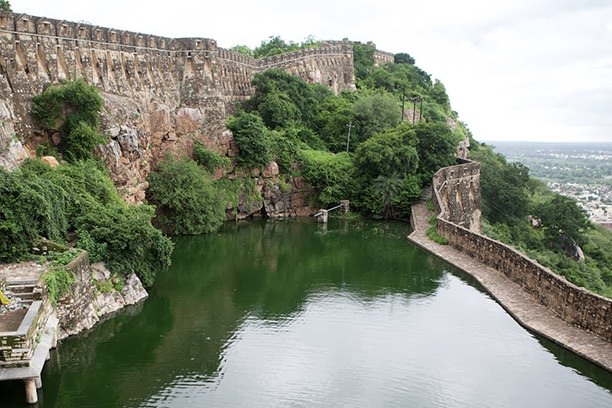 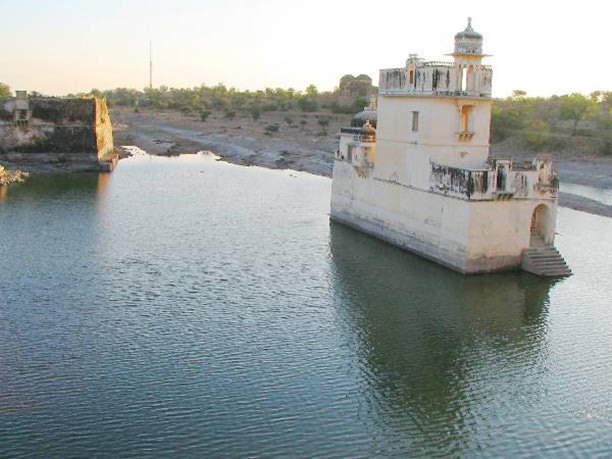 A palace built in a small man-made lake to honor the memory of Rani (Queen) Padmini, who was said to be a legendary beauty. As per legend, the Sultan of Delhi, Alauddin Khilji became besotted with the Rani after glimpsing her reflection in the lake surrounding the palace. He sacked Chittor to win her affections, but the Queen committed ritualistic suicide (called ‘jauhar’ locally). This account inspired a 16th century epic poem, Padmavat, which, in turn, was the source for the 1923 opera, Padmavati. 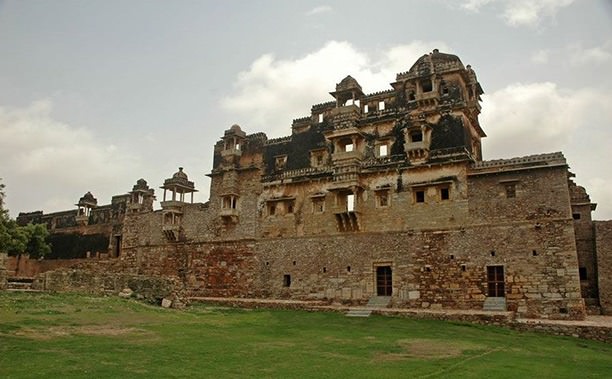 The ruins of this palace are the oldest construction within the fort complex, named in honor of a 15th century king, Rana Kumbha who defeated Mahmud Shah Khalji. 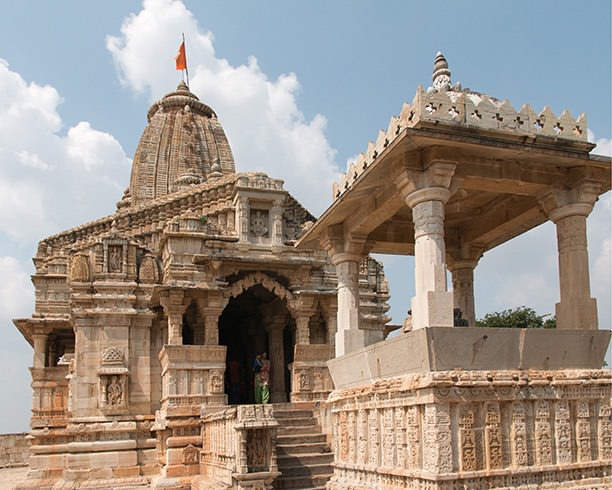 The Rajputs of Mewar traced their lineage from the sun and hence, called themselves “Suryavanshi” (literally, begotten from the Sun). As such, they built a number of sun temples. This was one, originally constructed in the 8th century. After it was destroyed in the 14th century, it was rebuilt in honor of Kali (‘Kallika Mata’ literally translates as ‘Mother Kali’), the Hindu Goddess of strength, vengeance and righteousness.

A short video overview of the Chittorgarh Fort.

3 responses to “Offbeat: The Mighty Fortress of Chittorgarh in Rajasthan, India” 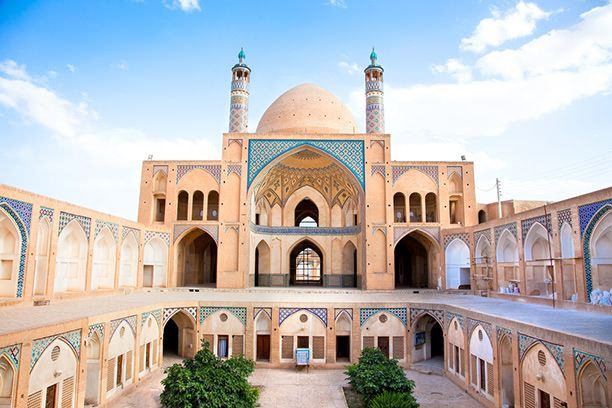 Offbeat: 10 Things to Do in Kashan, Iran